What not to do in conflict resolution

When it comes to what not to do in conflict the 5 big are:

Some people don’t say anything until they’re ready to explode. They end up blurting out their anger in a hurtful way. Instead of discussing the issue in a calm and respectful manner, some complain to everyone who will listen, except the relevant party. Have you heard people complaining about service after they have left the restaurant, instead of speaking calmly to the manager about their issues? This avoidance of discussion of frustrations, with the people who can actually do something about it, leads to increased conflict over time and inappropriate outbursts. Avoiding an argument altogether may seem like a less stressful route, but usually ends up causing more stress as tensions rise, resentment festers, and inappropriate outbursts result. The healthy path is to address and resolve conflict with the person involved in a respectful manner.

Having to be ‘right’ or ‘win’ all the time blocks the possibility of a compromise or real solution. We all have different views and perspectives on a situation based on our own experience try not to insist other people Must see it your way. It is not always an attack if they have a different opinion. Allowing ourselves to see an issue from another’s perspective can produce solutions we may never have thought of alone. There is not always a ‘right’ or a ‘wrong’ way; each point of view can be valid. When we focus on ‘winning’ the argument, the relationship loses! Try to find mutual understanding and come to a resolution that respects each person’s needs.

Some people blow things out of proportion by making sweeping generalisations, when something happens they don’t like. Criticism attacks character with statements about the person, rather than an action. “You always…” and “You never…” and statements such as “You are always late!” or “We always have to do what you want to do!” Think about whether this is really true. Specifically what not to do in conflict resolution is bring up past conflicts, this is often an attempt to move the discussion off-topic and avoid responsibility for one’s own actions or lack of engagement. Criticising and blaming another person for the situation can be a result of not wanting to admit any weakness, trying to avoid the ‘shame’ for being ‘at fault’. These actions are big conflict don’ts as they cloud issues, move away from the topic and become an attack on the person rather than speaking to the issues, and increase the level of conflict. They also lead us away from a mutually beneficial solution.

4. Attempting to be Psychic vs. asking questions:

Assumption and guesses about what the other people are feeling and their motivations, instead of asking questions about these areas, leads to poor communication and increased conflict. We are not mind readers. ASK! These guesses and assumptions speak more to our own interpretations, and our own motivations, than the other person’s. Assumptions are likely to be based only on faulty interpretations of the other’s actions—and tend to be negative! e.g. deciding someone arriving late means they don’t care enough to be on time. These assumptions cloud the issues and create hostility.

5. Failure to Listen and Contempt:

Long-term problems occur when participants don’t feel heard, allowing resentment and unresolved conflicts to grow. Contempt is the body language that indicates they think little of the other person, regardless of what they say in words. Interruptions, eye rolling, sighs and the lack listening, and attempting to understand, says far more than the words do. We don’t care what people say, we are far more likely to believe what they do. Contempt is the key indicator of a failing relationship. Defensive people often deny any wrongdoing and work hard to avoid looking at the possibility that they could be a contributor to the problem. Really listening and empathising with the other person is a powerful tool in conflict resolution! What not to do in conflict – show contempt. 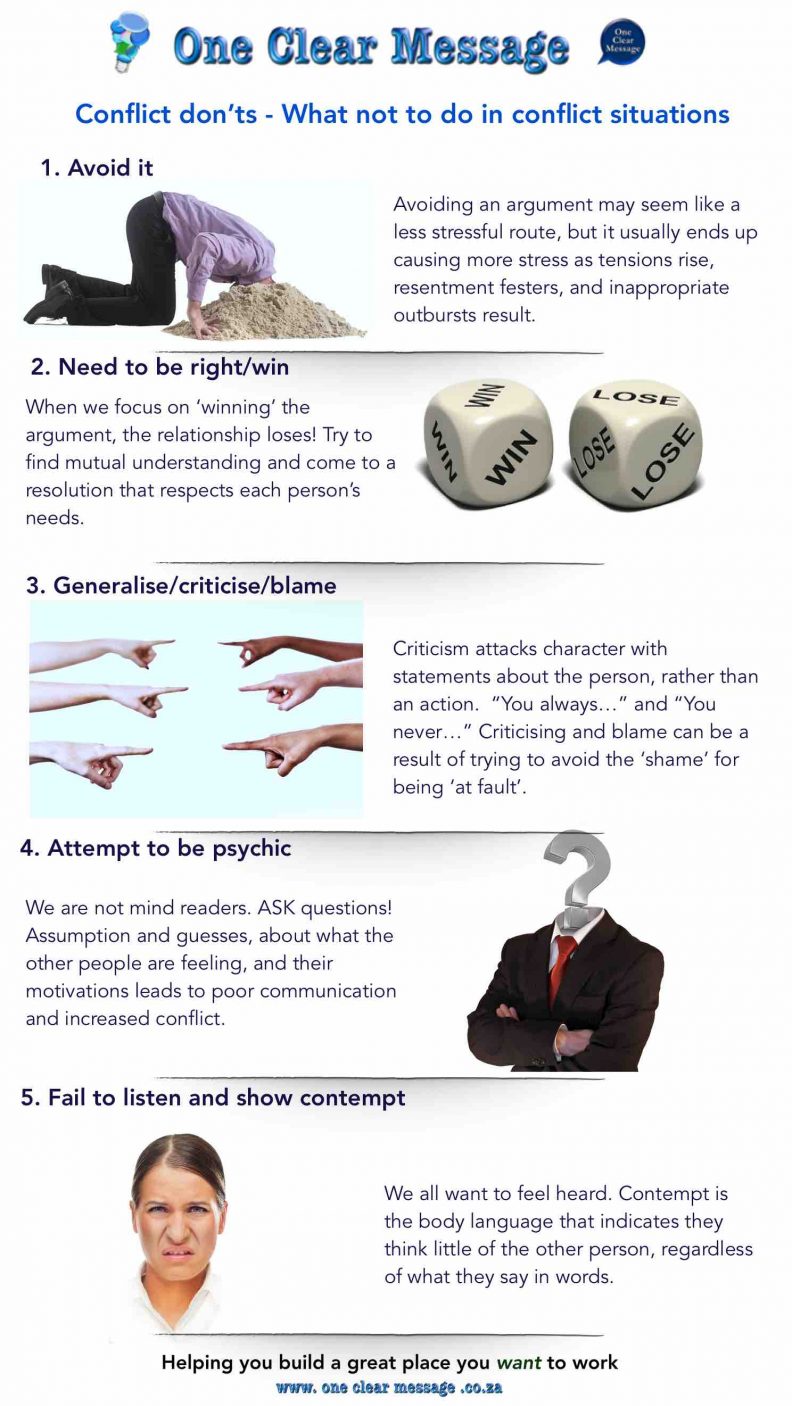 The ability to view conflict as an opportunity to analyse the situation objectively, assess the needs of all parties and come up with a solution that helps you all leads to stronger relationships, creative solutions, and clearer communication. Remember what not to do in conflict next time you are faced with conflict.