Even in traditionally process driven environments like manufacturing, the ability to efficiently design, sell and support your product can add more value to the organisation than the ability to manufacture alone. With increased automation the international trend is away from unskilled or process supporting labour to skilled knowledge or service skilled professionals. This means that each year a greater percentage of work in the organisation is dependent on roles that have hyper performer distributions.

Think about the people in your organisation who perform in creative, service and intellectual property development. Each of these groups has hyper performer superstars. Some developers are ten times more productive than the average, some sales professionals deliver double what their peers can, certain designers far outperform their peers, certain leaders similarly outperform their peers in building high performance teams. These hyper performers are the skilled individuals you want to attract and retain in your organisation. These are the people who develop new products, build efficient cost saving processes, land huge deals or help empower your sales force to achieve new heights. Their unique combination of skill, passion, drive, and energy enable them to shine. If we are lucky enough to find some of these high performers, we should pay them very well and create a supportive environment to ensure they get to do what they are best at each day.

This ties in with the Jack Welch’s 10% bottom performers in his “rank and yank” bell curve reviews approach. As we move into a knowledge and service society this is less true and can be a particularly toxic and damaging approach. This practice tends to cause a variety of issues. It limits the number of potential high performers (5’s) and creates a percentage of “failures” or low performers at the bottom of the scale. So if you have a high performing team someone still has to be at the bottom, even though they may be a great performer. Hyper performers are essentially encouraged to leave and collaboration is limited (This is the main reason Microsoft has scrapped their forced ranking annual reviews – a lack of collaboration and innovation). The bell curve reviews model limits the number of employees at the top and means that only those with the highest ratings receive great incentives. Given our inability to rate effectively (“idiosyncratic rater effect”) and if an individual performed well but ended up in the middle (average) part of the bell curve, they are likely to feel under-appreciated, under-rewarded and likely conclude that those who got the highest ratings were those who “played the game” well or who are politically well connected. This approach can encourage employees to seek an alternate work place where they can get ahead. Additionally, it reduces collaboration (as Microsoft discovered) as helping each other is not in our best interests in a “Survivor” style environment. 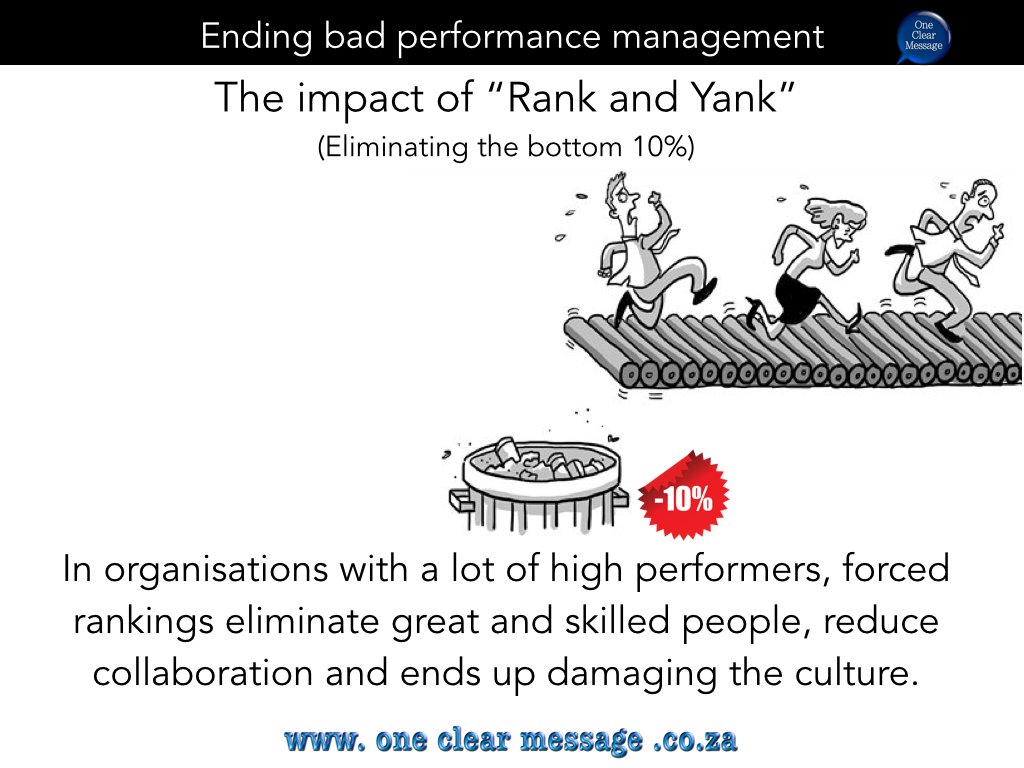 In a bell curve model incentives to develop and grow for the majority are reduced, as the model tends to create lots of people in the “middle.” It is easy to become complacent in the broad middle segment rather than striving to become one of the hyper performers. I believe that we all want to be great at something, so why not we create a system where every single person has the opportunity to become a star performer? If your organisation, like most these days, focuses on product design, service, consulting or creative work build a process that supports each employee’s development and rewards them for working harder and collaborating. Look at what sports teams do to drive results, they hire and build superstars each day, pay them well and recognise success.