How do you praise your staff, learners or children when you give Performance feedback? Do you praise them for being intelligent, naturally talented, or for their effort and attention to detail? In her seminal book “Mindset: The New Psychology of Success” Carol Dweck demonstrates the benefits of praising effort rather than intelligence. Dr Dweck speaks of two different mindsets – the Fixed or Growth mindset. The different mindsets create two different psychological worlds and focus the person’s behaviour and interaction with others.

In her study Dr Dweck gave several hundred New York kids a test. After marking them she praised half the group for the effort that they had put in, and the other half for their intelligence and marks. The students were then offered a choice of two further tests. One similar to the original and one slightly harder. The students praised for intelligence mostly chose the easier test (90%), whereas those praised for effort mostly chose the harder test (90%). Dr Dweck’s conclusion was that the “Intelligent” group were frightened of failure and letting the teacher down, while the “effort” group were keen to learn from their earlier mistakes and gain skill.

Those with a Fixed mindset tend to care first and foremost about how are judged, as intelligent or stupid. Workers and students with this mindset are more likely to reject opportunities to learn if they might make mistakes, additionally when they do make mistakes they are liable to try to hide them. Fixed mindset people are likely to believe that if you are intelligent you shouldn’t need effort, that talent and ability should bring success with little or no effort. This mindset can be a disaster in classroom or in a business. Those with a Fixed mindset often took the easier path while trying to be the “star” 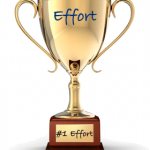 Those with the Growth mindset, in contrast, care about learning. When they make a mistake they correct it and strive to learn from their mistakes. These people increase their efforts and look for new learning strategies when they face setbacks and challenges. They are more likely to view the brain as a muscle, where the more they exercise it, the stronger it becomes. They understand that as we take on new and challenging experiences our brain forms new connections and that, over time, makes us more capable and able. In fact they often seek out Performance feedback, rather than avoiding it like their fixed mind colleagues.

Do you create the Fixed or Growth mindset when you give feedback?

If you want to learn how to create One Clear Message and keep your Performance feedback three times positive then contact us today!

How to approach difficult conversations
13 July 2014